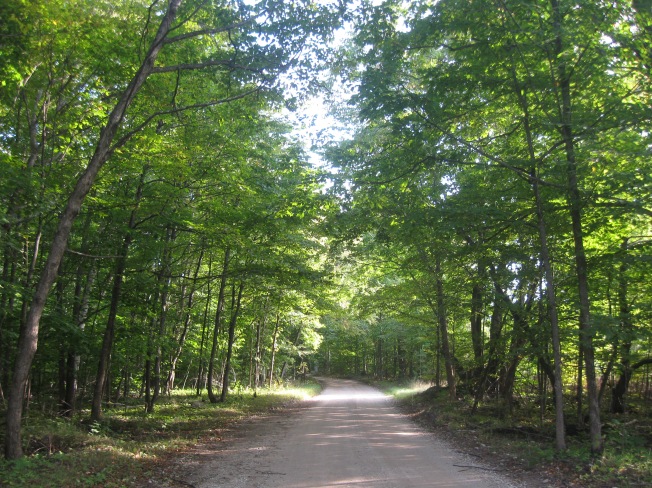 List the things that felt important five or ten years ago but are unimportant now:

“What have you held onto too long?”

That is the question presented to me when I opened a book of writing prompts this evening. Further, it says, “Go. Ten minutes.” Well, no matter how late in the day, and in spite of my weariness, I can write for ten minutes. About what I have held onto for too long.

I have held onto old grudges and resentments and angers…forever, I think. Definitely for too long. I wonder sometimes if I ever truly let go of anything

When I was four or five years old, my mother punished me unfairly. I was standing on the little brown wooden stool at the bathroom sink, giving my doll a bath. My mother came in, and accused me of having gotten into the medicine cabinet. She was alert to the dangers of the bathroom, as I had recently nearly cut off my thumb with a razor blade I’d retrieved from the trash can. I had not gotten into the medicine cabinet.

Before I grew up, I managed to break a thousand rules, and many times got away scot-free. I think. I’ve forgotten much of it. But I never forgot the one incident when I got two spankings, when I had done nothing wrong. And, though more than sixty years has passed, I can still manage to feel a bit of resentment about it.

I remember when Brenda blamed me for something I didn’t do, when Ted got away with pinching and pulling hair, and when I didn’t get a birthday party. That’s just my childhood! Looking over my adult years, I can recall every snub, slight or expression of hostility that I encountered – or imagined that I encountered – in my whole long life.

I could write a book about my marriage alone, and all the anger that festered there. Other relationships could have a book of their own. Then, consider my dealings with landlords, medical professionals, lawyers, bosses and co-workers over all these many years.

Even though I know it’s silly to remember all that stuff, and I can laugh at myself for my long-lasting bitterness, it’s still a lot to hold onto. I could let go of all of that. And save my failing memory for the good things.

List the things that you hope will bring you joy this week: 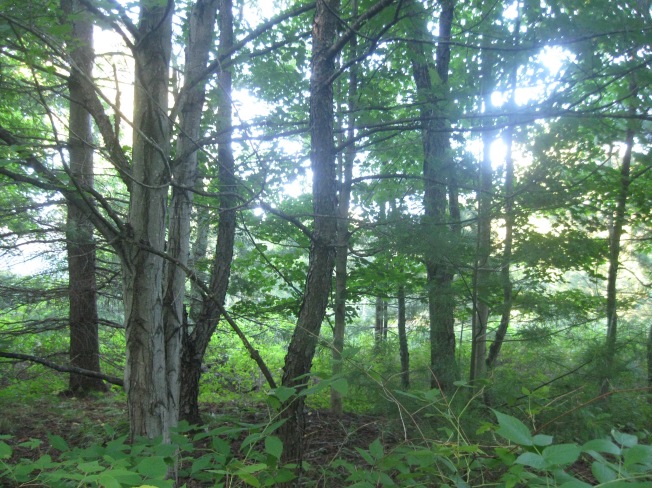 Some days, I know what I’m going to write about before I sit down. Sometimes I can’t type fast enough, for the discourse winding out in my mind. Too many topics and too many angles for discussing them are problems I have encountered.

Unbelievable, almost, on days like this. This is one of those days when, though I have committed to writing, I seem to have nothing to say. My confidence – in having something worthwhile to say, and in having the ability to say it – wanes.

I run through current events in my life, looking for a topic I can expound on. I have girlfriends visiting the island; the second of my drawing classes is this afternoon; the garden is still offering up beans, tomatoes and squash; the summer-like weather is holding on; the lawn needs to be mowed.

“My writing has devolved to the equivalent of a newsy Christmas letter,” I tell myself. I finish the lecture with a bit of sarcasm: “Oh sure, my live is soooo interesting, I can’t talk about anything else!”

I page through a few writing books, looking for prompts that might offer possibilities. The sense of inadequacy pervades: “Impossible…nope…nope…can’t do it…not today…no way.” “A better writer,” I tell myself, “could do something with that idea.” Not me. Not today.

I know this is a passing phase, the result of rushed writing sessions and not enough time to explore ideas. It happens. I am still a writer. I am not giving up. Or, at least, I’m only giving up today. 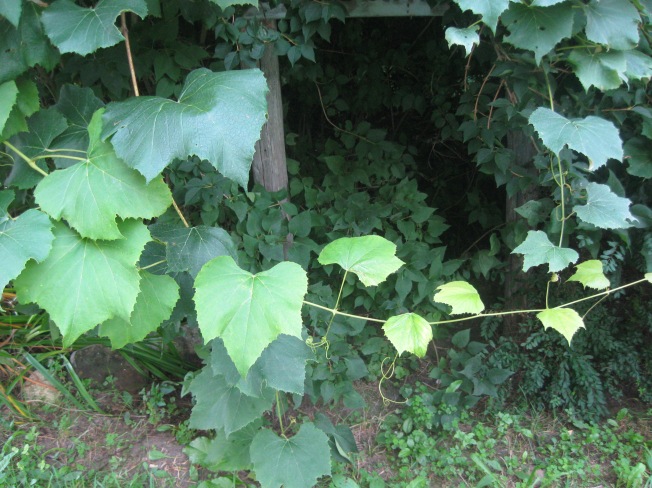 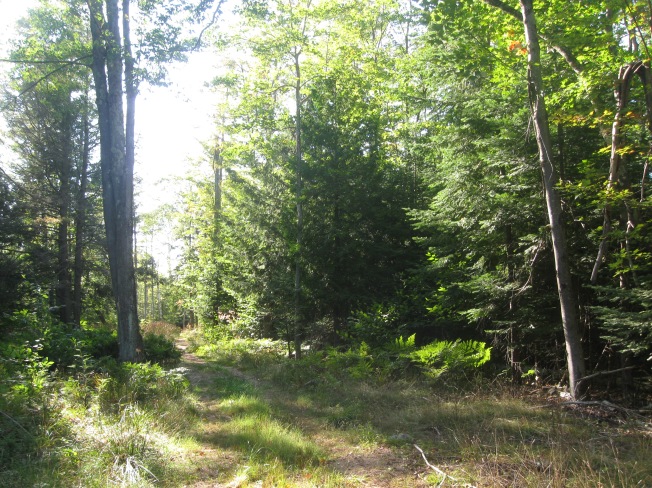 Now, in September, the signs of fall are sneaking in. It’s inevitable. And it makes me appreciate every precious bit of summer that is left.

Nights are cooler, now, often dipping into the low 40s. It’s lovely for sleeping, but I put the little heater on in the morning and wear my fleecy robe while I have morning coffee. I sometimes put a jacket over my work clothes before I go out the door. And yet, by midday, the sun is bright and has warmed everything up. Another beautiful summer day!

The garden is almost at its end. The tomato plants have withered and died, but the tomatoes hanging from the vines continue to ripen. I eat them raw every day, My lunch yesterday was a salad of fresh tomatoes, avocado and chunks of mozzarella cheese in a light vinaigrette. In the afternoon, I stewed a kettle-full of the sweet little plum tomatoes, and put them in the freezer. The bush beans are done for the year, but the pole beans – planted later – are still producing. I’m still getting summer squash each week, more than enough for my needs. I have two little muskmelon on the vines that may – if frost holds off long enough – have a chance to ripen.

I’ve pulled up the pea vines, once they were finished. When I dug my little mound of potatoes, I added the withered plant to the compost heap. Otherwise, I leave things in place. Where a plant is taking up space, it helps to keep the weeds from coming up there. The rows of bush bean plants are still green and healthy; the zucchini vines are waist high, and beautiful. Whether they continue to produce or not, I’ll continue to appreciate their lush summer greens.

The cooler temperatures have made walking in the woods a pleasant activity again, and the dogs and I are taking full advantage. Even in the big woods behind my house, mosquitoes are now rare. We take that trail every couple days, to gather the blackberries that grow on either side. Cotter’s Trail, which begins across the Fox Lake Road and leads off  through the woods to the west, is another regular walk.

When we go to Fox Lake, and after the dogs have had a swim, we walk up the access drive and down the Fox Lake Road to the big rock and beyond. Fall mushrooms are out, and now and then there is an early glimpse of autumn color. Mostly, though, these still feel like summer days: the best, most appreciated summer days. 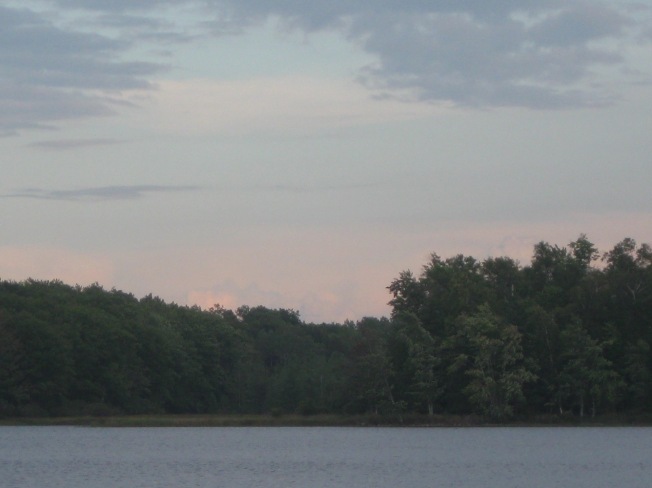 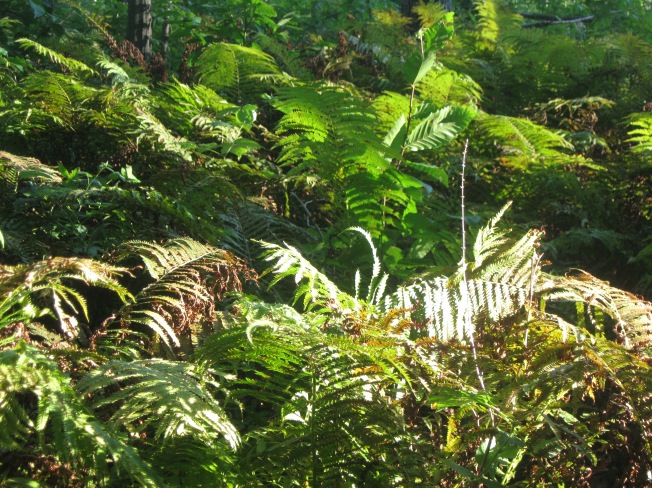 List ten ways to get excited in the next ten minutes:

It rained, here on Beaver Island, long and steady through the night. It was perfect for sleeping, and I took full advantage. I’ve taken a few phone calls, but otherwise have had only the dogs in and out activity interrupting my coffee-drinking, news-watching lazy day.

The clothes I put on the line yesterday are still there. Last evening, they were damp, after hanging in the still, humid air all day, and I decided to just leave them, to finish drying. This morning they were dripping wet. My newly tightened clotheslines were drooping with their weight. The second load, waiting for clothespins and clothesline space, remains in a basket on the floor of the laundry room. 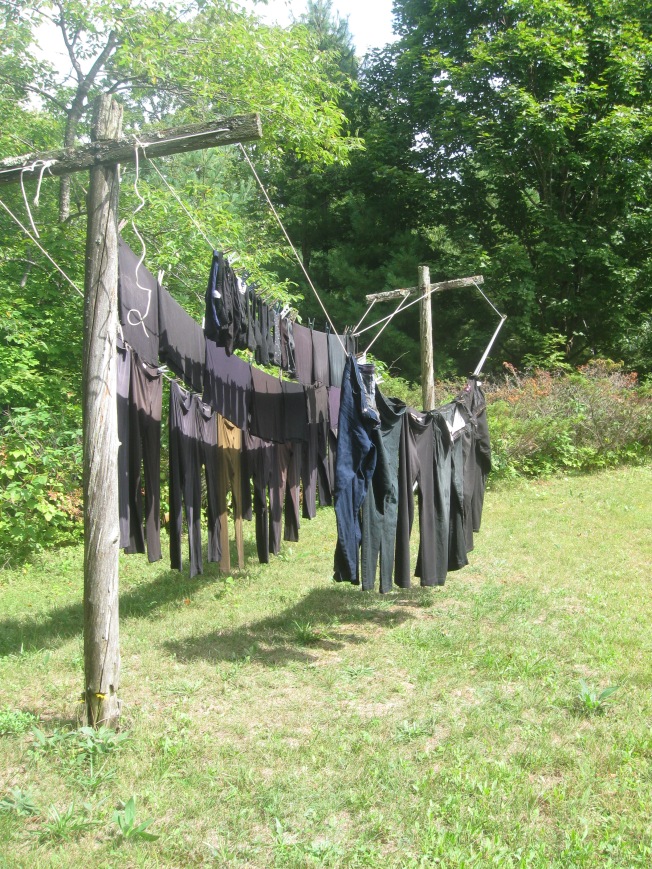 Every meal, this time of year, includes something fresh from the garden. Fresh cucumbers and sliced tomatoes show up daily. Beans get a place on the plate day after day. Last evening, golden rounds of summer squash, sauteed, accompanied hash browns made from a potato dug from a plant that came up as a “volunteer.”

I didn’t plant potatoes this year, in my small garden space. I compost my potato peels, though, along with other kitchen scraps, and use the resulting humus as fertilizer and top dressing in my garden. Now and then, a plant will spring up from composted seeds or – in this case – the eye of a potato. it always feels like a bonus. This year, the volunteer potato plant, which grew up not too inconveniently in the pathway between a muskmelon and a zucchini plant, yielded eight large, firm potatoes!

Yesterday, I set squash to simmer in the kettle, and tomatoes to stew in the slow-cooker while I went out to pick beans. Today, I’ll be filling the freezer containers. I pick blackberries every day, but have not yet gotten enough to consider putting them up for winter. I eat them fresh over cereal, in yogurt, or simply topped with milk. The rain might change that. If conditions are right, the canes will continue producing berries right up until frost.

It’s early, yet, to think about frost, but several nights recently the temperatures have dipped into the 40s. That’s a reminder that it is inevitable…and not that far away. I set a large, sickly jade plant outside this spring, to take advantage of the fresh air and sunshine. It has thrived! Before I look to bringing it back inside for the winter, I have to consider a larger pot…and which piece of furniture it will replace!

Other than an occasional bloom here and there, the flower beds are almost finished for the year. Except for the upright Sedum, which is just getting started. The Autumn Joy pushes up in the springtime and spends most of the summer looking an awful lot like broccoli. In September, it has reached its full height, developed flower heads, and started to show color. Soon it will be in its full glory. On, into September!

List the scents, spaces, textures and sounds that bring you joy:

The wooded path I take to walk the dogs 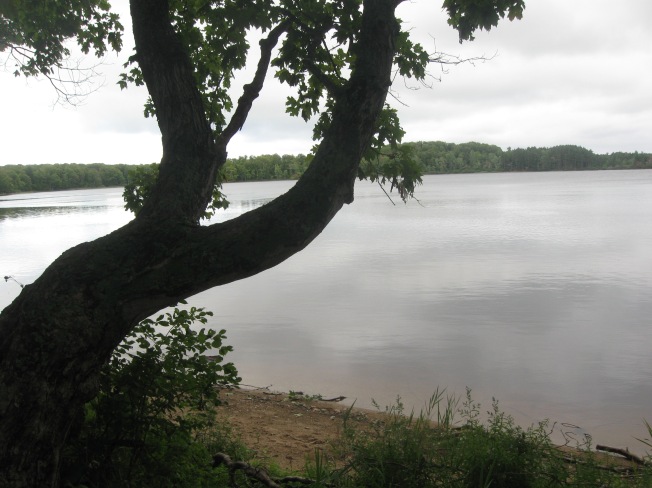