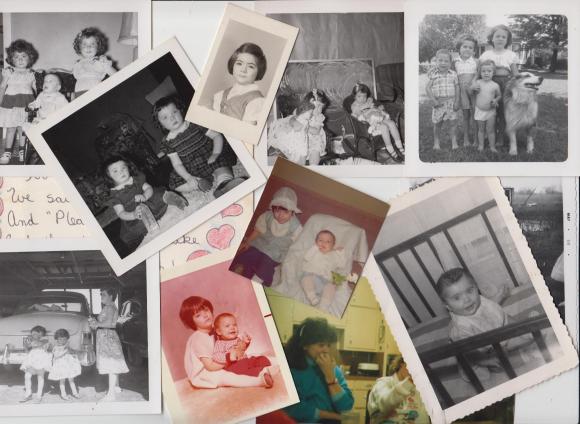 I traveled back to my hometown again last weekend, for another wedding.

This time the bride was my niece, Nicole.

Two weddings in two months seems like a lot for me to plan for, with travel and gifts and boarding the dogs…just imagine how the parents of these two sisters feel! Both were beautiful ceremonies, held in the church that has served our family well since my Mom and Dad were married in it over 62 years ago. Both receptions were lovely gatherings of family and friends with lots of laughter, music and dancing.

Each weekend was a mix of old memories and new pleasures.

Always, when I get close to the Lake Nepessing Road exit, I think of getting off. From there, it’s a right turn from the exit ramp, a short drive, then another right turn onto Hunt Road, and less than a quarter mile until a right turn would put me right in the driveway in front of the house where I grew up, and where my parents lived their entire adult lives.

There’s just a pang of remembrance, the reality that they are no  longer here, a sigh, and drive on to the next exit, which puts me closer to my sister and brother-in-law, Brenda and Keith’s, house.

There, we are welcomed with open arms, my cousin, Bob, and I, down from Beaver Island. Brenda has prepared a guest room for each of us. When my daughter, Jen, arrives from Lake Odessa tomorrow, she’ll share my room. Barbecued pork, for hot sandwiches, is in the oven, and plates of fresh vegetables are ready, as accompaniment. Later, Keith’s nephew, Steve, drops in with his family, here from out of state. My baby sister, Amy, stops by with her daughter, Kristen, in the midst of last minute wedding arrangements. All are greeted warmly, invited in and welcomed to the table.

With such evident generosity of spirit, an observer would never guess that just that morning Brenda and Keith had attended the funeral for Keith’s Mom…that, in fact, Keith had been released from the hospital just in time to attend…that before they came home to wait for us to arrive, they’d had to help convert the Odd Fellow’s Hall from the site of the funeral  luncheon to a Bingo hall. They had to be exhausted, physically and emotionally!

Yet, Brenda doted over us. “How was the drive?”… “Could you use a luggage rack?”…”If you’re chilly, we can set up the heater, and there are extra blankets…”

Brenda gave me a choice of going for a pedicure with her the next morning, her treat, or joining her in her yoga class.

On the dresser in my room, I found a manilla envelope with my name on it. Inside, old photos and other memorabilia that they’d found and thought I should have. There, among dated snapshots of me, pictures of my children and a card I’d made for my Grandma Florence, were old photos of Brenda and I.

Proof positive…no matter what, she always has been there for me.