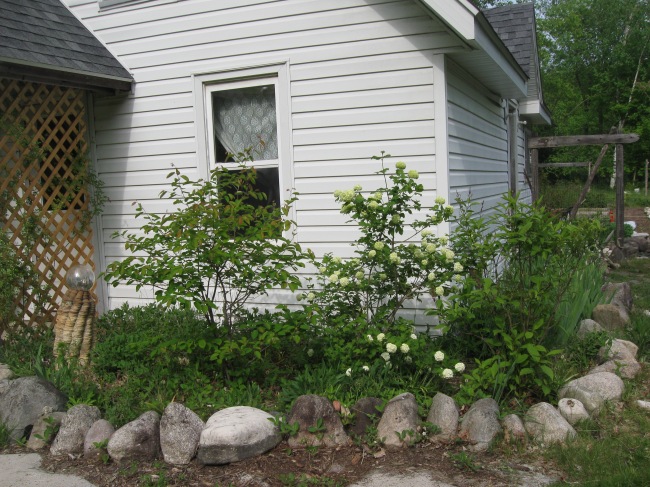 This is not my garden.

This is the front of my house, showing the snowball, serviceberry and lilac bushes, the seven sisters rose climbing the trellis, and one of my ceramic sculptures with a gazing ball on it.

I’d love to show off the garden…but it’s not ready, yet, for the photo.

Last year about this time, I showed off my garden plan. It was hand drawn on graph paper with extensive notes of what was going where.

It never got much beyond the planning stages, though.

Oh, I cleared out a lot of weeds. I gave away daylilies, raspberries and strawberries. I put in tomato plants and planted radishes and salad greens. I even started framing in my raised beds with cedar boards.

Then, as fast as that, summer was underway, with all the flurry of activity that comes with it.

The strawberries continued to send out runners. The raspberries spread into the paths by way of their strong roots. The sod persisted in moving in from the fields to the south and east, and from the lawn to the north. My pathways were becoming so dense with unwanted growth, I couldn’t even get a shovel through!

An hour a day was not enough to make any headway, yet that was all the time I had to give it.

Though I harvested rhubarb and berries, greens and tomatoes, mostly I was just frustrated with my garden.

When friends came over for a tour in July, I was embarrassed by the lack of order. “A work in progress,” my guests offered, and I kept that thought for the rest of the season.

Snow was a relief, when it came, as it marked an end to the battle.

This year, a fresh start.

Spring was uncommonly cold and windy through the month of May.

Everything that had a toe-hold last year settled in even more seriously.

The man I hired to take out three wild cherry trees dropped the last one right through the garden fence, over the rhubarb patch and onto the raspberries. I don’t know if he’s ever coming back. The tree he dropped in the front yard had prevented me from mowing lawn the last time I had an opportunity to do that.

Mosquitoes were threatening to carry us away!

This weekend, with two days off, I faced what seemed like an insurmountable challenge.

Though I usually double-dig my beds employing only shovel, wheelbarrow, hoe and a lot of stamina, I had some help this year. My cousin, Bob, brought his rototiller over yesterday! He earned my undying gratitude by turning that overgrown garden patch under for me.

It seems like something I may be able to manage now!

I still have lots yet to do, but that bit of help was just the boost that I needed.

I’m not yet ready to show the end results, but in the last two days, I’ve got quite a list of accomplishments:

I have tomato and pepper plants still in their pots, ready to be planted very soon. It’s late – but not too late here on Beaver Island – for the things I start from seed.

I may have a photo to show before long!

Meanwhile, I could use a rest!