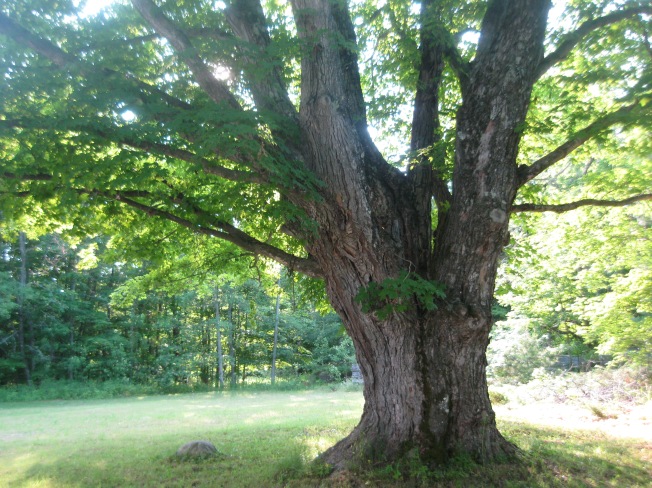 The land we bought was part of what had been a 40 acre parcel: a square, 1/4 mile on each side. Fox Lake Road curves a little bit through the western boundary line. It had been split into two twenty-acre parcels, both with access to Fox Lake Road, still 1/4 mile deep. The northernmost parcel had a two acre lot cut out of the northwest corner of it, and had a little cabin on it that was used as a hunting camp.That was owned by Thomas Tange.

The rest of that piece – eighteen acres – was owned by Dick Goller: pilot, plumber and  well-driller with a well-deserved reputation as a con man and a shyster. He was a short, round man with black hair, a booming voice and a big grin.  Though he was sharp at making deals, he also had a reputation for being a little dense. He came in to the Shamrock one morning, complaining that his foot was killing him. He swore the boot had gotten smaller overnight.

“Did you leave a sock inside there?” Bill Welke asked him.

With that, he unlaced his boot and pulled it off. To guffaws and chuckles all around the coffee-drinkers table, and to Bill Welke’s absolute glee, he spilled a dead mouse out of his boot on to the floor.

“Huh! Well that explains it,” he said, “…suppose it wasn’t dead when I went to put the boot on. Little guy should’ve spoken up!”

Goller worked mainly from his home in Cedar Springs, but had started taking quite a few jobs on the island. Enough, he felt, for having a second home here. When he started putting his house up, he accidentally built it over the property line, on the land belonging to Tange. He split the 18 acres in half, then, and sold nine in order to purchase the section that his home was sitting on. He priced it pretty reasonably and, to sweeten the deal, he offered to put a well on the land for no additional cost.

So it happened that – just as my husband was recovering from his fall from a roof and getting back to work…as we were moving from Corner #16 to Johnson Mill Road…as I was opening a gallery in Lapeer, Michigan – we got a call from Ed Wojan about buying a piece of land. Ed was in the real estate business, and knew we’d been looking at property on Beaver Island. He thought we might be interested in this deal. We were! We made a trip to the island to have a look.

Seven miles from town, the land had a rough old two-track logging road running through it. My Dad said, “That’s a little too far from town,” and we said “No way!” From our home in North Branch, no town was closer than seven miles; I traveled twice that distance to Lapeer, and twenty miles further to college in Flint. Seven miles seemed like nothing. The logging road would be an advantage, we said. We could use the first part of it as a driveway. The back was a ready-made walking path through the woods. We could drive a truck back there, too, for hauling out firewood.

The property had three hundred foot of frontage on Fox Lake Road. The front third was a fairly open field with  wild black cherry trees and juniper bushes scattered throughout. The back was hard wood forest: plenty, if managed correctly, to provide us with a constant source of wood for heat. On the north side of the property, on what had long ago been the edge of a farmer’s plowed field, were three huge maple trees. That was it…the final selling point. We loved it!

This is my life on Beaver Island, as illustrated by my seven year old grandson, Brandon.

There’s my little house, and car, the grape arbor (Brandon used to call it the “Gray Barber”) with a child inside, the big maple tree with two swings and two rope swings hanging from its branches…it’s all here.

In the background, then, you can see the Beaver Island ferry, filled with smiling and waving passengers. In the sky above is the Island airplane (note the shamrocks on the wings) also filled with grinning passengers.

It is being escorted in by an Army plane, that is dropping some pretty scary fire bombs all over the landscape. What?!

Well, perhaps to a seven year old boy, that element of dangerous excitement is the only thing this island is missing…so he put it in. A little bit of fiery wings on our island plane would make for a more thrilling ride, I guess.

Brandon is older now. Though he continues to amaze me with his artwork, this drawing perfectly suited my mood yesterday.

I woke up with a feeling of dread and depression that could neither be explained nor wished away. I had lots to do, and I kept plugging away at my list, but felt that I was fighting my way through thick sludge…waiting for the bombs to drop. I once heard depression described as a feeling of being covered with a heavy, wet wool blanket; that person knows depression. It covers you over…it is not a choice. There’s always the fear that it won’t go away.

Of course, I know all the things to do. Get out in the fresh air, get exercise. Don’t dwell on it. Keep working at everyday activities. Keep a list of accomplishments; keep marking things off the list as they are completed. Go easy.

So, I took long walks with the dogs, morning and evening. I spent several hours in fairly mindless but worthwhile activity in the garden, and several more hours in the studio. I did not vacuum the rugs, do my exercise video or write. I ate only leftovers. I went to bed early.

Today, the sun is shining here on Beaver Island. We got a rain shower overnight, and everything looks fresh. My clouds have lifted, too.

On to another day!