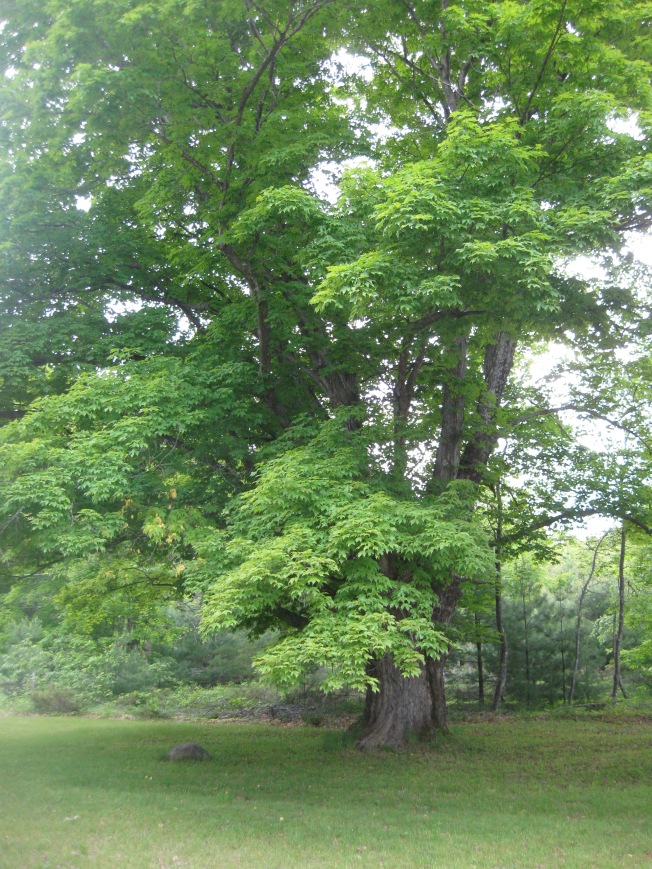 Yesterday after work, I retrieved my grandson from the beach and headed for home. The clouds were already gathering. The smell of rain was in the air.

Tommy spent the last two afternoons at the public beach in town.  He made friends, and enjoyed the sun, sand and water. On the way home, he told me how exhausting it is, being in the water. “I can only imagine…” I told him. When we got to the house, he headed for the shower.

I pulled out the lawnmower. I’d run out of gas the other day, just shy of finishing the back yard. There was a small triangle of tall grass between the clothesline poles and the garden fence. I had also missed the area directly behind the garden, as the broken fence posts were leaning that way.

I pushed the fence back to the garden side, scoured the area for dog toys, filled the mower with gas and fired it up. It was quick work, and not unpleasant. There was a slight breeze that kept the mosquitoes at bay. I was finished in no time at all, with the yard finally finished and the mower tucked away in the shed.

I clipped bunches of sweet peas, wild daisies and yarrow to make a rustic bouquet. I heated up several types of leftovers for dinner. When we’d eaten our fill, we gave the rest to the dogs.

We opened the windows to the cooler air and waited for the rain. After dinner, we both retreated to our computers for work or play. It was a quiet evening inside, a quiet rain outside. A nice finish to the month of June! 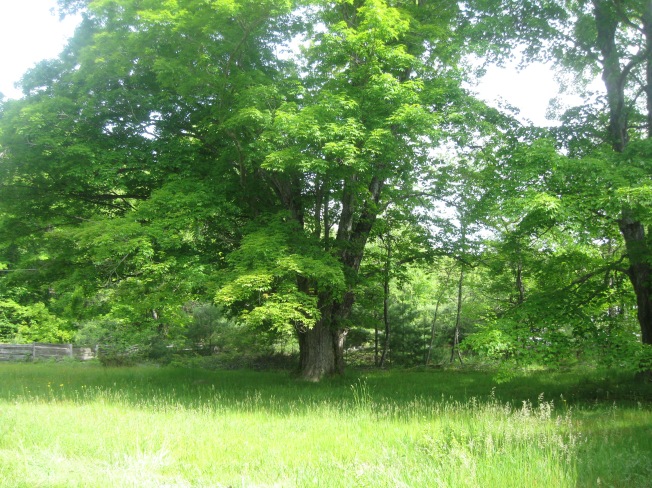 I got up at 4AM to respond to two Emails that had been disturbing my sleep.

I did a bit of bookkeeping, wrote a couple checks and played a game of on-line Scrabble.

At 7:30 in the morning, I decided to go back to sleep. Three phone calls came in while I dozed, but I let the machine pick up.

At 8:30 I got up and made coffee. I checked the answering machine and made a few telephone calls. An hour of writing, a bit of tidying the house, then a shower.

I pulled up some grasses from the edge of the walkway, and pruned some dead branches from the spirea bush.

I drove to town, picked up my paycheck at the hardware store, and went to the bank. One short visit with Sue, who carries my work in her sweet gallery here, and a look around at her new offerings, then back to business. I checked on my car, which is in the repair shop. He was still working on it, and told me to keep the little Tracker he’d loaned me, for now. If he got my car finished, he’d drive it out to my house and pick up the “loaner.”

Home…first inside, to greet Rosa, and to make a sandwich for lunch.

Mowing the lawn was my big plan for the day.

I was away in May, when I should, first, have mowed. I returned home to an overgrown lawn, followed by rain that soaked the long grass and made it impossible to mow every time I had a day off to do it. Then my riding mower went on the fritz. It’s an old, old Craftsman, with tires that go flat overnight and a gas tank that leaks, but it keeps on running…until it doesn’t. My neighbor and I have been talking about it, had a guy come take a look at it, but so far no firm diagnosis, and no cure.

Last weekend, I bought a new mower. It’s a cheap push mower, with pathetic little wheels for this rough lawn, but better than nothing. The mosquitoes were about to carry us away! It was like a jungle out there for poor little Rosa Parks! Something had to be done! Every night after work, I’ve been mowing a little…except the evening when it rained…and the evening when I got invited to dinner…and the evening I had company. Today, with the entire afternoon to devote to it, I could get some mowing done!

Not the back yard, which has such huge clumps of quack grass that I’ll have to take the trimmer to it first. Not the south side of the driveway: that got roughed-up when the guys came to set my garden shed in place, and needs to be smoothed out with rake and shovel before the grass can be tackled. Not the trim work around the house, flower beds, fire pit or trees. No time for that.

The yard on the north side of the driveway is about seventy feet wide. From the house to the stand of trees at the front, where I stop mowing, is 150 to 200 feet. That’s the area I mowed today.

From 2PM until 4:30, when I mercifully ran out of gas (which signaled time for a break), then back at it from 5PM until almost seven-thirty. The tall, tough stalks topped with yellow flowers have to be mowed over several times, and sometimes pulled by hand. Areas where the grass was especially thick…or wet…or both…had to be approached slowly, one small bite at a time, or it would cause the lawn-mower to stall out. Wild blackberry bushes had gotten a good start in the front near the wood, and crackled as the blades broke them up. As dusk came on, the insects came out in force. Several applications of insect repellent hardly slowed them down. A dampness in the air suggested impending rain; I was determined to finish that section.

I did it, then stowed the lawn mower back in the shed and came in for the night.

I count three black fly bites, and about a dozen mosquito bites. Two new bruises, with no explanation for them.

Leftovers for dinner: poached tilapia, and some vegetables and grains in a light sauce. It all seemed a bit healthy, so I re-heated it with a pat of butter. Perfect! Chocolate almond ice cream with a sliced banana for dessert.

One large glass of plum wine.

Thunder…a storm is rolling in.