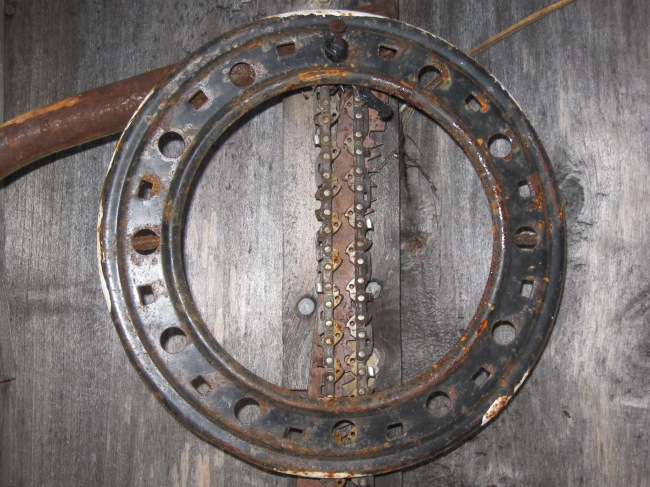 Beginning again was my tactic when, as  a child, any game was getting out of control. “Start over” was my battle cry. If, when playing “school”…or “house”…or “church”…the little kids pushed their limits or if I, in my role of teacher or sister (my older sister, Brenda, was – of course – “Mama”) or priest did something out of character, I’d call, “start over!” and we’d go back to try to do better. As if we were putting on a play, not just playing make-believe! If I made a stupid move in checkers, or stumbled in a foot race, “start over” was my cry. It didn’t always work, but it was always worth a try.

Self-Improvement is the sub-title of my life.

I am drawn to self-help books in library or bookstore. Exercise, diet, organization, meditation, procrastination, money-management…the list goes on and on. They are so full of hope! Each one, when I open to the first page, seems like it has the possibility to change my life forever.

This is my time of year!

The new year offers a time for fresh beginnings. Time to look at what needs to be changed, and make a plan. Time to make a list of improvements to be made. New Year’s resolutions!

I once made a list of one hundred items that I felt needed to be worked on in my life. They ranged from patience and temper-control to neatness and organization to diet and exercise. From their sheer number, it took a little time for them to all fall by the wayside…but eventually they did.

I’m great at making resolutions. Follow through, not so much.

Looking back over the last forty years, I can say I have learned a few skills and gathered a world of varied (and sometimes contradictory) information from self-help books, but the road to life-changing self improvement has been a long and very gentle incline.

My best-laid plans and charts for a better new year take the same trajectory.

The trouble, as I see it, is this: Life is not linear.

I can see it when I hear my daughters say things to their children (that they swore they’d never say) that I said to them (though I said I never would) that my mother said to me. “Because I said so,” is an example that comes to mind.

It is obvious every time that I think, “let me go back to the beginning and start over.”

Lists are linear. Life is not.

This year, my goal is to just keep going around.

Of course I’m old. Not that old…but old enough.

My house was built on the front, semi-cleared area of a woodlot. This was a farmstead over a hundred years ago. Large maple trees with rock piles at their bases mark the old boundaries of the plowed fields. Still, the woods want to move back in.

We removed a dozen small trees to make space for the foundation of this little house.  In the thirty years since, I have removed a dozen more – as well as over a hundred wild juniper – to make room for a garden, and to have a small lawn. I’m having three overgrown, diseased wild cherry trees removed this year, along with a pine tree that is threatening to take out my electrical service in every big wind.

Clearly, I live in the woods.

So, two questions; the answer to both is yes. One would think one has nothing to do with the other. And yet…

My sister, Brenda has developed “floaters”. Fortunately, I developed them several years ago, so I could enlighten and advise.

Brenda is one year and twenty days older than me. She hit puberty a full three years before I did. She reached adulthood at least ten years ahead of me. Maybe more. Being the oldest child in our large family, Brenda had to grow up fast, to allow me and the other younger siblings our “slacker” childhood.

She may be making up for that now.

Retired, Brenda is having quite a bit of fun.  She and her husband are on their way to Seattle right now, to get on a cruise ship. And, although (did I mention?) she is one year and twenty days older than me, Brenda is far behind me in all areas of aging, from menopause to wrinkles. Now it’s the “floaters.”

There was no one to advise me. It is one of those aspects of aging that nobody talks about. Until you are diagnosed. Then everyone says, “Oh, that, yes that’s been driving me crazy for years.”

It makes me wonder what other secrets are waiting.

Floaters, in case you don’t know, are caused by the stiffening and separation of layers of the eyeball, usually due to age. It causes the afflicted to see tiny dark spots moving in their peripheral vision, randomly and annoyingly.

Because no one had advised me of this, and because I live in the woods, I didn’t know I had floaters.

I thought it was “no-see-ums.”

No-see-ums: the tiny black, biting gnats that come out in swarms in the Spring of the year. Because the wind will carry them away, they like to get inside the ears, behind the eyeglasses, under the collar or at the hairline. There, they take an enormous bite with their tiny jaws, usually leaving blood running and an itchy welt.

They look amazingly the same as floaters.

For months, I was waving away insects. I was complaining to others, “aren’t the no-see-ums terrible this year?” and “do they always last this long into the Fall?”

Finally, it started to dawn on me that this was a vision issue rather than a living-in-the-woods problem.

Then I wondered about a detached retina. Or a stroke. Or several other scary scenarios.

Lucky Brenda – not living in the woods – thought about stroke right away!

I went to the Medical Center, and then to the Eye Doctor. Everyone assured me that it was a normal – albeit secret – part of aging. They told me coping strategies that I was later able to pass on to Brenda, in my new role of  “expert on aging.”

Now, this year, after what seemed like an exceptionally long winter, Spring has arrived on Beaver Island. What a noisy Spring it has been, too!

I’d lay down at night and hear loud chirping. Such pleasant sounds of the season! Birds…at night? Was it the little peepers? Crickets? I read somewhere this was going to be a tremendous year for Cicadas. Maybe I was hearing Cicadas.

After several nearly sleepless nights spent trying to decide what life form was making the sounds that were keeping me awake, I decided to try earplugs. No offense to Spring and all of the sounds of the season, but I need my sleep.

Oddly enough, the sounds are just as loud with ears plugged.

Come to find out, once again this has nothing to do with living in the woods.

It seems I have Tinnitus.

I’ve heard, at least, of Tinnitus.  A problem of the inner ear (most often associated with age) that results in a buzzing or ringing in the ear.

Or, as in my case, the sound of Springtime in the woods. 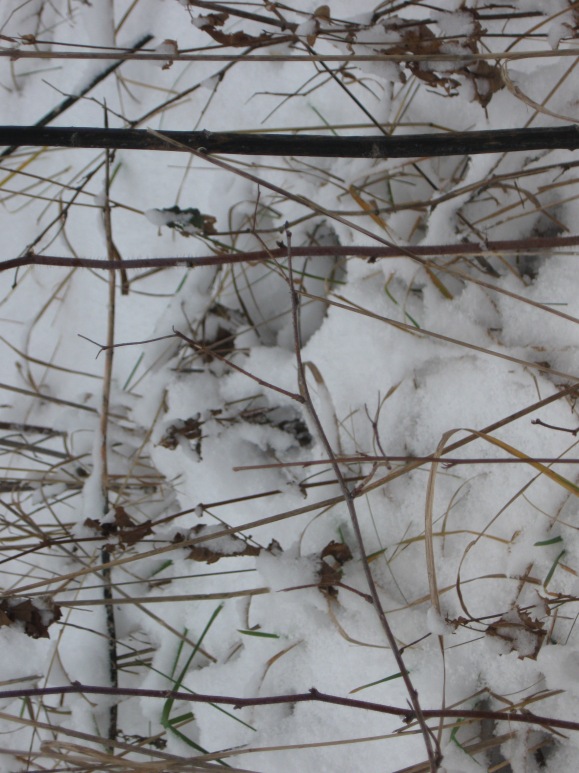 We all feel it…

But words don’t meet the challenge.

The knowledge that this can happen. That it did happen.

It weighs on my mind and fills my heart with heaviness.

In that, it has given me a common bond with every other person living in the shadow of this horror.

I’ve listened for what others have to say… watched to learn from how others handle it.

Our president is very good at this. Sadly, very well-practiced, too.

My sweet daughter brought it home by speaking of her own grief, her difficulty in talking to her own children, and by honoring their teachers.

Robert Genn, an artist whose newsletter almost never touches on the political, wrote of the tools that we choose, and eloquently suggested that we choose the paintbrush, the cello…not guns.

Here on Beaver Island, we met on the beach.

There was some talk about the tragedy and the grief, the lack of understanding and how to move forward.

It was a good effort, but words seem to fall flat in the wake of this travesty.

There was a song. A prayer. Then the suggestion that, before parting, we give each other the sign of peace.

As we moved around to shake hands, pat shoulders, give hugs…I realized that was exactly what we needed.

A bit of comfort.

The knowledge that we’re all in this together.

And that is all that I have to offer.

Words are not sufficient. 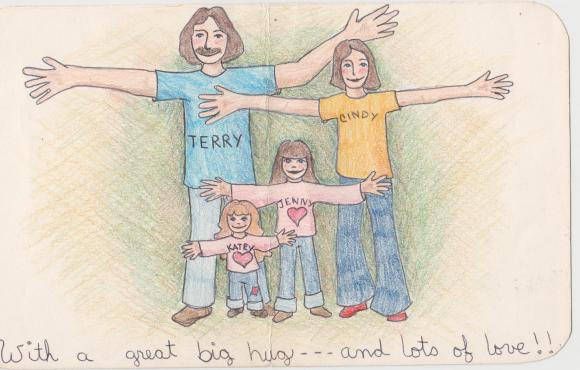 This  card came back to me recently, with a handful of old photographs.

I made it for my grandmother, Grandma Florence, about thirty-five years ago. She had been ill, and was just coming home from the hospital in mid-February. The front of the card had a poem I’d written:

We searched the stores through and through

To find a Valentine for you.

We found “I love you”s and “Please be Mine”s

But they just don’t make “Get Well” Valentines,

And none of them said what we wanted to say

So we decided to tell you in a different way…

And there, inside the card, is my little family, arms outstretched, offering a big hug.

I don’t think anyone embarks on the adventure of a marriage, ever imagining it will end.

We don’t have children imagining them hundreds or thousands of miles away, with troubles and difficulties you can’t simply fix with a kiss or a band-aid.

We don’t form friendships thinking of the end of those bonds.

We don’t take in dogs or cats or even short-lived gerbils imagining their demise.

Endings always take us by surprise.

If we knew the pain of change, transition, death…or, knowing it, if we allowed ourselves to dwell on it, I think we’d never allow ourselves the joy of new beginnings.