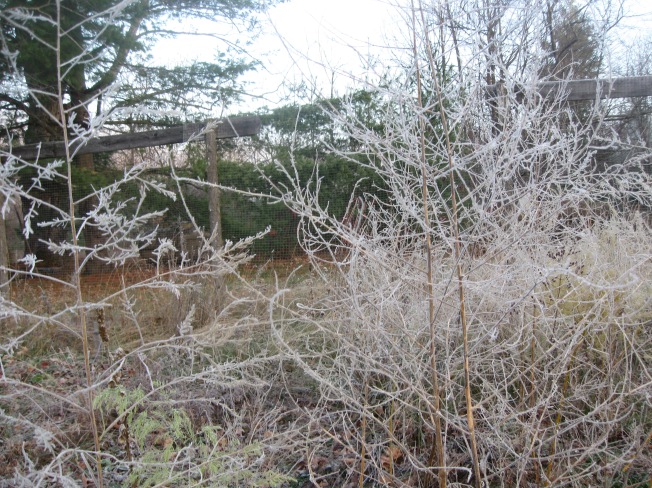 I walked out this morning before the sun had reached the treetops, camera in hand and the little dog at my side.

My only intent was to photograph the asparagus; the ice-covered fronds were waving at me from their garden bed.

Grass crackled under my feet. A layer of frost covered everything.

The grapevines are bare, except for a few wilted leaves. I’ve been picking grapes for weeks, to eat and to share. The local birds have indulged as well. The Coffell family came last week, to pick the last few bunches. In exchange, they left two quarts of fresh apple cider and a jar of their homemade maple syrup.

The wisteria, climbing up the gate post, still has its leaves, though they’re dry and limp and flutter madly as I walk by.

The sedum, Autumn Joy, is undaunted by this crisp morning. I may get time yet, to go out and prune the stalks. If not, they’ll stand strong all winter, with their rosy dried flower heads peeking out above the snow.

A clump of “brown-eyed Susans,” the blossoms all covered in ice crystals, seem surprised by this turn in the weather. The already furry mullein leaves have just added another layer. 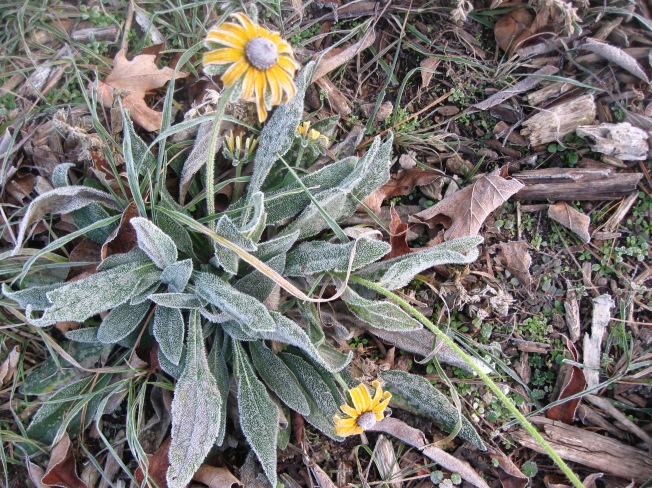 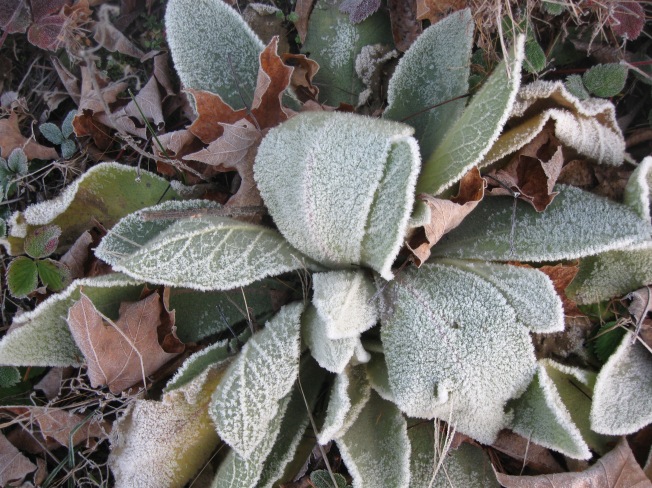 There are apples that we pick in the early fall. Others – the winter apples, which are the best for storage – are inedible until we’ve had a frost.

Frost mellows the flavor of parsnips and kale. It halts the growth of carrots, so they’ll keep in the ground until they’re needed.

Frost signals – better than any calendar can – the end of summer.

I came in inspired from my little walk.

I put a pot of beans on the stove, for soup that can simmer all day.

I mixed rolled oats, pumpkin seeds, sunflower nuts and almonds with a bit of cinnamon and a good swig of maple syrup. I spread it out on a sheet pan, and put it in a low oven to toast, for homemade granola. I’ll add currants and dried cherries when it comes out of the oven.

I made bread dough, and put it on the counter where it can share the oven’s heat to rise.

There are other things to do: housekeeping; bookkeeping; writing; laundry. They wait for me, year ’round.

It’s only in the fall and winter, though, that they are joined, in my house, by the smells of soup, fresh bread and cinnamon.

Sometimes a reminder to enjoy this present day is the very best way to begin the morning.