The outside of the studio door

Last week, just because a combination of outside events happened right around the days I normally have off, I ended up with an unprecedented five days in a row without having to go in to work. It’s going to wreak further havoc with my already struggling winter’s budget…but that’s another story. Unfortunately, I spent most of that time in bed, with a rumbling belly, chills, and a headache that would not go away.

The one day I felt well enough to be up and about, I attended the funeral of a dear old friend; the next day – when I was well enough to go to work – the business was closed so that the guys could wax the floors. I took a portion of that day to get back into the studio.

I sorted through collage materials, and discarded a whole mound of papers and other detritus that was taking up space in the studio…and in my mind. I stowed several things that have held center stage, though I have no intention of working on them in the near future. Finally, I finished the two large collage-paintings that have held my attention for the last several weeks.

These are clearly companion pieces, two more in a series that I’ve been working on for the last five or six years. I have a longer explanation for the motivation behind them, but – in a nutshell – they speak to the everyday moments that make up a life. Taken as a whole, it’s easy to say, “that was a horrible year” or “that was a really dark time.” When we pay attention to the smaller increments of time, though, there is always beauty…joy…something to marvel at.

These pieces can stand on their own, but complement each other. At the moment, I have them standing vertically (not their intended orientation) and close beside each other, like a diptych…and I like them this way. 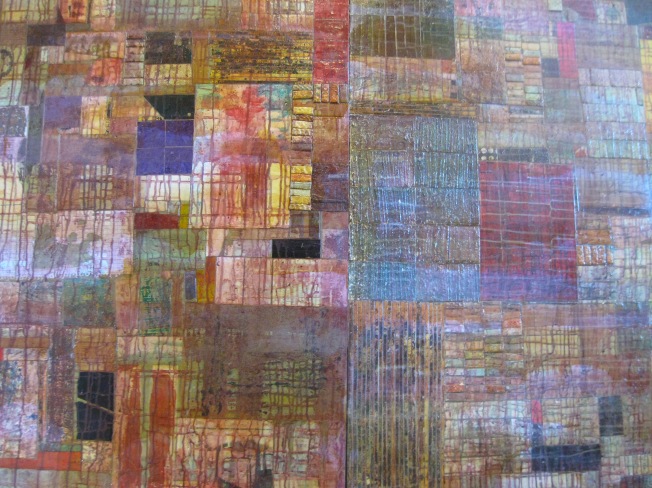 vertically, as a diptych…