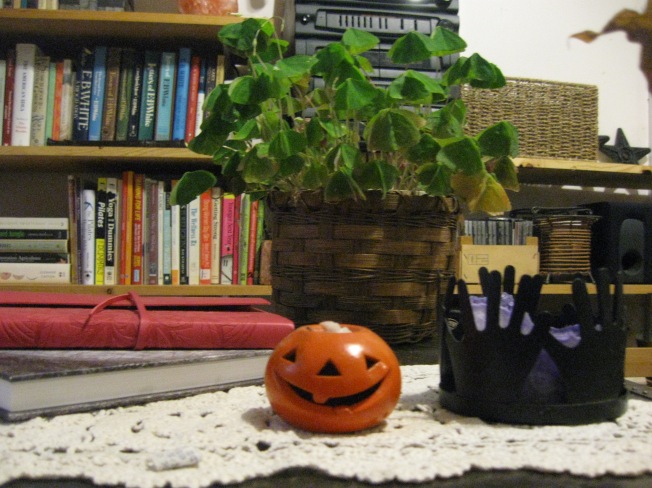 So, it was Tuesday afternoon. Having whiled away my two days off in various procrastination strategies, wastrel tendencies and fits and starts of actual progress, I had just arranged to have one additional day off. Flush with energy and new-found enthusiasm for the project at hand, I went to it.

Before continuing my cleaning and rearranging, a trip to town was necessary. I hadn’t picked up my mail in at least five days; I had a small collection of letters and payments to send out. The Post Office was my first stop.

Now that the grocery store has gone to their shorter, off-season hours, it’s difficult to do any serious shopping in the few minutes between me getting out of work, and their closing time. It has to be done on a day off. I went to the market next, with my long grocery list.

Finally, since I was in town at the right time of day, I stopped at the pub for happy hour, to have a drink with some friends. I told them all about my kitchen: the mess I was in, the progress I’d made, and my plans to complete the job. By the time I finished my beer, I was ready to get back at it. I said good-bye, and headed for home.

Distracted by the wind and rain, and focused on greeting the dogs and getting the groceries inside, it was a while before I realized I had no electricity. When the power goes out, I don’t have telephone or computer or lights. I can’t run water or use appliances. Darkness comes early this time of year. I lit candles and thought about what manner of cold, raw thing I could have for dinner. When the lights came on – after about an hour – the first thing I did was make a warm meal.

I had barely finished, when the power went out again. That time, it stayed out all night. I later learned that Mike, our Great Lakes Energy guy, had been out working in the wind and storms for 24 hours straight. At that time, it is mandatory that he take eight hours to catch up on his rest. So, those of us living south of the airport that were affected by the outage had to wait until the next day for it to be restored.

It wasn’t so bad. I have a battery-run lantern that gives enough light to read by. My E-reader was charged, too, and loaded with several books I hadn’t read yet. The dogs were happy to settle in. The weather was conducive to good sleep. If I hadn’t been so intent on getting things done, it would have all been quite enjoyable.

Wednesday morning was damp and chilly. I still had no power. Another drive to town was needed. Though I almost never make frivolous trips, always aware of the age of my car and the price of gas, I had no intention of getting on with my day without knowing that the outage had been reported, finding out what the prospects were for having the power restored, and getting a cup of coffee!!

To the back seat of my car, already filled with boxes of old Beacons, I added a bag of garbage and several sacks full of recyclables. A stop at the Transfer Station to get rid of all the trash, in the boxes and bins available there, would help to justify the drive. I gathered coin and small checks for deposit; a visit to the bank was added reason for the excursion. Having rationalized to the point where I could believe a seven-mile drive to town was sensible, I decided to start by taking myself out to breakfast.

Though I had a book with me, and had been looking forward to reading – alone – in the restaurant while I ate, I accepted an invitation to join an old friend at his table. He was in good spirits, and related a couple island stories I hadn’t heard before. The conversation veered a little to the south when he told me about having his toenails clipped…but by the time my food arrived, he had moved on to other topics. We had a nice visit.

I didn’t know, though, until much later, that the morning meal was going to be the best part of my entire day. But, again, I’m out of time. Part 3, I swear, will be the final chapter of this tedious saga.