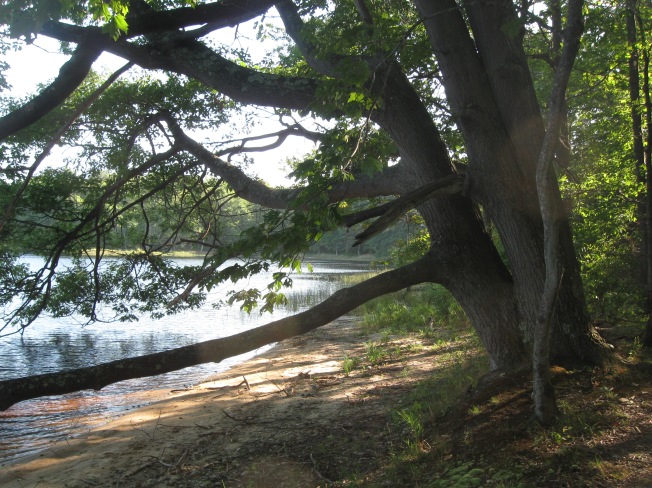 Yesterday started out cool in the morning, rallied for a short time in the early afternoon with a bit of sunshine and rising temperatures, then finished off with a combination of cold, damp and wind. An autumn day.

So clearly was yesterday an autumn day, I resigned myself to the idea that summer was over. “Maybe, at least, we’ll get a nice, long Indian Summer,” I thought. Then, today dawned bright and clear. Warm, even. Glorious! A true summer day! All the better – and better appreciated – because it was not expected.

When I got home from work, I first made the rounds of the yard and garden. From the garden I harvested a handful of green beans, a half-dozen peas (still!), and three almost-ripe tomatoes. Circling the perimeter of the yard, I filled a bowl with blackberries.

Inside, then, I fixed a sandwich for lunch, and debated what job to tackle next. House-keeping? Studio? Home repair? A Sunday-afternoon nap? When I opened a book, Rosa Parks gave out an audible sigh as she lowered her chin to her little paws. No fun for her.

Enthusiastically, YES, was her answer. Darla got in on the excitement, too.

I loaded two dogs, one book, one camera and one bottle of beer into the car, and off we went, down the road through the woods to Fox Lake…which rarely disappoints. It was beautiful today, with bright sunshine on blue water, and just the tiniest nip in the air that served to remind me to savor this day.

We walked along the shoreline and then through marsh grass until we came to the Fox Lake bog, which is beautiful in its own way. Back through the trees, then, to the boat launch where I opened my book – and my beer – and relaxed while the dogs continued their wag-tail explorations. Only when they were ready, when they had left all the sights and smells to come and sit at my feet, did I suggest we move on.

But not for home yet. A stop at “the forty,” which was my Grandpa’s wood lot, was next. I had not packed buckets, but drew out an empty ice cream carton and a cottage cheese container from the bag of recyclables in the back of my car. While the dogs, freshly curious, checked out the paths, I filled both containers with blackberries.

The glories of the season, and two dogs wagging their tails: it was a perfect end-of-summer day! 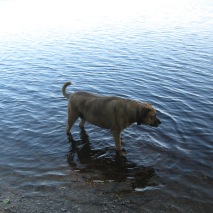 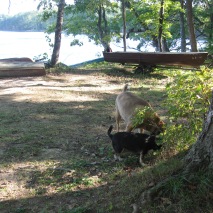