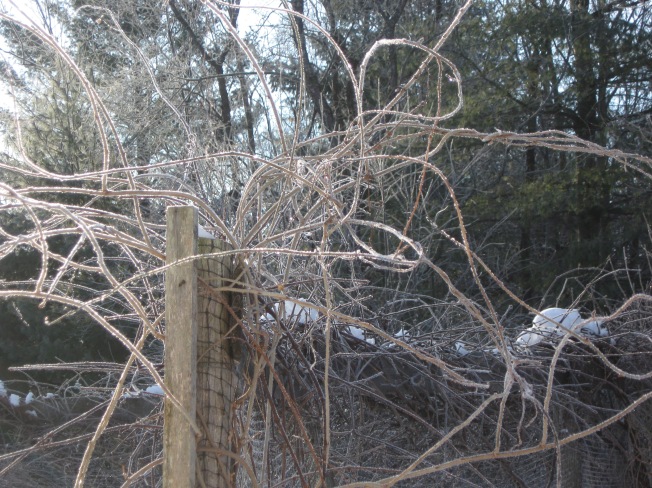 “Get right up and take a walk first thing,” I told myself, when I finally felt ready for sleep last night. Greeted with this icy landscape this morning, I decided to wait.  I’ve been struggling with lethargy and sadness for a week now; time to turn it around. I’ve tried to find the problem.

It’s winter; the sun rarely shows itself through the mass of gray clouds that seem to have come to stay. It’s been bitter cold, and windy, making it impossible to spend much time outside. Inside, my house is drafty, too. Though I have a thick rug underfoot, I also put on heavy slippers and wrap in a fleece robe if I’m going to sit for more than just a minute at the desk. In fact, no matter where in the house I am, or what I am doing, I am generally trying to function while wrapped in many layers.

Politics, I can’t even begin. Every day, another bitter encounter, another strange and fearful turn of events. I can’t stop watching and listening, but I feel like it’s the same thing that makes it almost impossible to look away from a train wreck.

I’ve had a big project going at the hardware store, that has left me exhausted by the time I get home in the evening. I feel like I should be getting big applause for the positive changes in organization and cleaning that is going on in the electrical aisle. I spend too much energy trying to elicit notice, let alone a compliment!

One of my co-workers is still mad at me over a scheduling conflict, and that weighs on my mind. I fill out the schedule. I don’t get paid extra for doing it, and I don’t have a lot of control over it. I basically just fill it out as I’m told. Except that if we’re overstaffed or understaffed, I have to account for it. And, in trying to please everyone else, I usually end up with the least desirable hours. What other hardware employee works every single Saturday and Sunday, almost all year long?  Only me. The one who writes the schedule. Still, I hate it when people are mad at me. I tell myself I’m just doing my job, and it will all blow over. That doesn’t seem to be happening.

I have a pile of work to do for the Beacon, which seems to fill every single nook and cranny of my life with obligations, must-dos and should-dos, until I just shut down. Up-dating the database is a continual chore. I have bills to send out, and others to collect. There are phone calls to return, letters to answer and work to edit. There is always some event I should be attending, in order to cover the story. Right now, I have a full issue of articles to write, that should have been done two weeks ago. So, again, I am running late, with no one to blame but myself.

We are halfway through the month of January. There are all those pesky new resolutions to be assessed. I have managed to stick to my diet, though it takes a lot more thought and preparation than I’m used to. It seems that I spend way too much time planning meals and cooking. I always have a mound of dishes waiting at the end of day. I have lost a solid three pounds, though one day last week the scale showed I’d lost five. It hardly seems like enough, for all the trouble. Still, it’s one minor accomplishment in a field of disappointment. Studio time, daily walking, three times a week for strength training or stretching, organize…one failed promise after another.

I came home from work the other day, and immediately called a friend. I started to tell her about my mood. “I cried all the way home from work, too,” she told me. We commiserated about the stages of the moon, planetary alignments, losses we’ve suffered and all the “shit” going on in each of our lives. None of it really explained the sadness. It’s hard for me to tell if events caused my melancholy, or if those were just reasons I came up with to account for it. I sent her a message a few hours later. “It’s Friday the 13th,” I said. “Figures,” she replied.

I’ve walked this path, though, a few times before. I know what to do. I warm my clothes in the dryer before getting dressed. I  layer fleecy sweats over soft jersey long underwear. I choose the bright pink, soft and cozy socks with stars that were a gift from my friend, Bob. For my coffee, I select the delicate cup with blackberries on it that my friend Sue gave to me. I grab my journal and go to the couch. I invite both dogs to join me there. Only when the time is right, I move to the computer desk. Soon, we’ll get out for that walk. Everything will be okay.