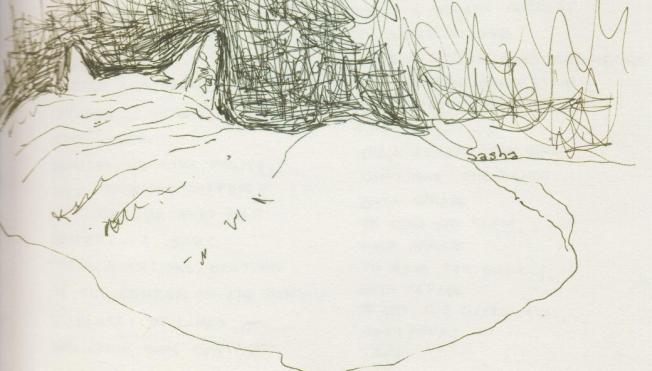 Sometimes, the most important thing is speed. I have a photo of a large ceramic sculpture that I was planning to post this morning. Because that would involve too many computer acrobatics (scan image into old computer, move from there to external hard drive, then to new computer…), and I have to be on time (ugh) for work today, I’ve opted for an old sketch, instead.

I’m not fast enough to get even a good photo of Rosa Parks. Though she’s the cutest dog in the whole world, she  won’t sit still. For every decent snapshot, I have a hundred rejects, where she has decided, spur of the moment, to scratch an itch, roll onto her side or run toward or away from the camera. Sketching her is absolutely impossible!

I’ve had better models. Sasha was a lazy, old cat, who often posed for me. I have several sketches of her, in various aspects of repose. Still, I had to be fast to get the lines in place before she twitched an ear or flicked her tail. Capturing the mood, and the essence of the subject is most important when fast sketching.