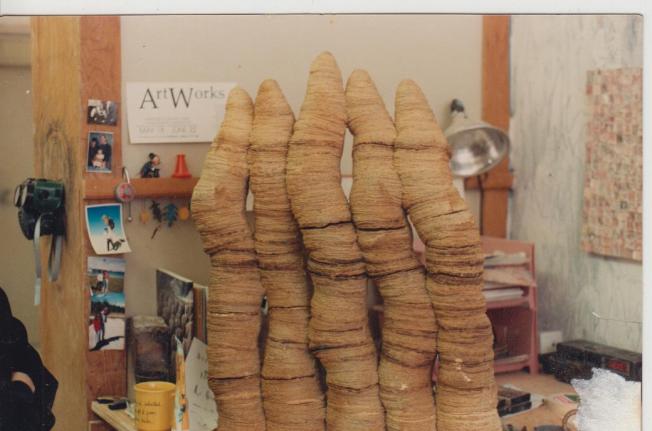 This piece was great fun to create, though it did not survive the firing process. The sculptures that I made by building with soft coils of clay were very prone to crack and separate between the coils. That, I didn’t mind. I heated solder until it melted and let it run down a slope made of a metal panel to form irregular and various-sized silver beads, about the shape of fresh water pearls. With dark gray mortar and the silver beads, I filled the cracks to accentuate the flaws. It was not always possible, however.

This piece, which was built up in coils that swirled in figure 8s, at times joining columns together, at others letting them grow independently, cracked along the coil lines, as expected. It also cracked vertically, which was not something that I could remedy in a way that pleased me.

I should have anticipated the failure. There were too many pressure points and areas where the clay would heat or cool (thus expand and contract) at different rates in the kiln. It was so fragile throughout the many weeks I worked to build it, that it could not be lifted from the wood panel (covered with a layer of fabric, so that the sculpture could shrink as it dried) that I built it on. It was moved into the kiln on that board. On the second day – of a five day firing process – when the heat was sufficient to turn the support board to ash, the sculpture would have to endure settling. Often the clay is in a flux state, and that can happen without incident.

Sometimes everything works out just as it should. This time, it didn’t. With clay work, what you take away from a failure is the experience of all the steps along the way, and knowledge gleaned from what went right, and what went wrong.