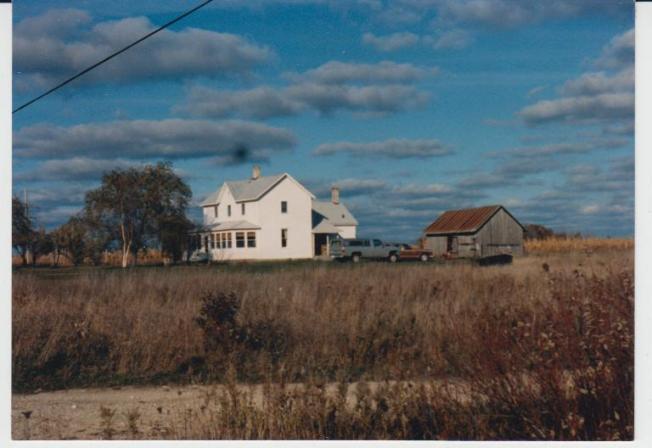 One more summer at the farmhouse, while we put our energies toward getting the building closed in on our property.

If you’ve every built a house, you know. There were permits to be filed and payed for. There was an order in which things had to happen, that involved several different contractors and their schedules. Drainage pipes had to be in place before the slab was poured. The place had to be wired for electricity before drywall could go up. Plumbing, too. Our plumber didn’t even live on the island!

While I had spent hours pouring over house plans, drawing up ours on graph paper, I hadn’t imagined all the things that would prevent those walls from going up. Lumber was bought or traded from the island mill for some purposes, but because it wasn’t kiln-dried, it wasn’t suitable for all of our needs. When we ordered lumber from the mainland, we had to arrange time to meet the boat to pick it up.

Unplanned costs were everywhere. Terry became a master at bartering labor for materials. Lumber that came from Wojan’s Mill would be paid for by his work at the mill during the next winter. Blue board and other insulation received from Cashman would be worked off, too. The Butlers put in our electricity with the agreement that Terry would work on the house they were building. Through that summer, he was spending many weeks down in the lower part of the state, doing jobs for his father’s roofing and siding business. When he came home, it was always with a truckload of materials.

I was in the luxurious position of not being a builder, so there was little I could do on our house at this stage. I worked at the Shamrock, made hearty meals for whoever was at the farm, kept up the yard, maintained the house and took care of the laundry with a wringer washer and a clothesline. Still, it felt like a life of leisure!

I worked at the restaurant all summer, but my morning shift ended at two. I’d go pick up my daughters, who would have completed their chores by that time, and we’d often head back to town to the beach. I did a lot of reading that summer, and had a great tan!

We had company through most of the season. Cousins came to stay at the farmhouse. Aunts and uncles came for vacation; other relatives stopped in to visit. We had many meals where the large table was filled with people of all ages, telling old stories long into the night.

By the middle of August, we conceded that we were going to have to finish the house while living in it, so we went ahead and made the move to Fox lake Road.