I can clearly remember when Mom first brought Sheila home from the hospital, placed her in the bassinet, and gathered us around to see the new baby. Brenda was four years old, I was three and Ted was one. Our birthdays were all in August. Sheila was born March first.

She was born in a leap  year, barely missing the 29th of February. She was almost named Sherry, but Mom’s friend Pat (later Pat Burris), who lived in the little cottage next door, had her baby first, and took the name. Mom resented that for the rest of her life.

Sheila was Mom’s biggest baby yet, and she held that record through all eleven children. She wasn’t a big kid, though. She was always small and slender. As an adult, she was the shortest of all of us. She always had quite a presence, though.

She still does, in my memories of her. There she is, in childhood antics, games, plans and fights. There she is, babysitting for my little ones. There, at Christmas, with little gifts for everyone. Sheila is there, in memories that stretch back almost sixty years, to that first introduction.

Unfortunately, Sheila didn’t last that long. She died in August, 2011. Today would have been her sixtieth birthday. Happy Birthday, dear sister! 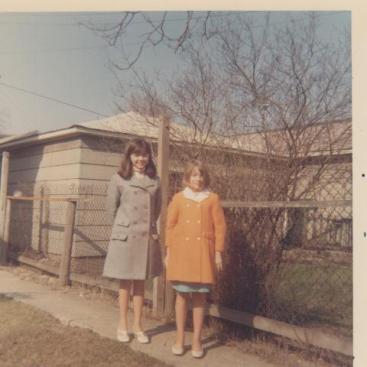 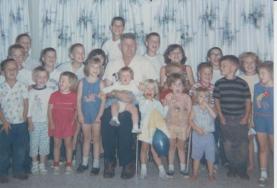 Grandpa George with all of his grandchildren: Sheila to his left, in the blue romper; I’m directly behind her

Dad and Mom with nine children on Beaver Island 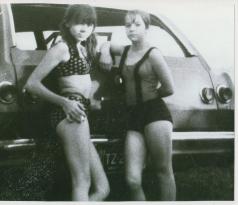