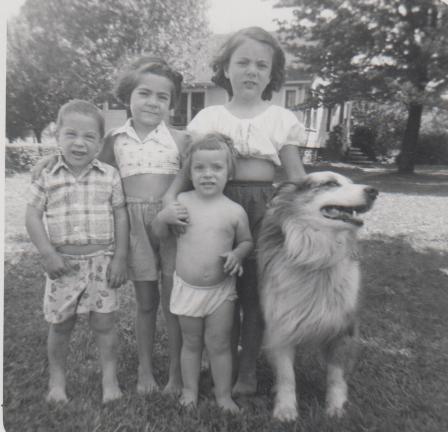 Ted, Cindy, Sheila, Brenda and Laddie, in the front yard with the grandparents house in the background.

As much as the grandparents house felt like an extension – a quieter, calmer, more accepting extension – of our own home, it was separate.

My Grandpa Ted died when I was six. Visits were different then. Sometimes Grandma would come to our house to talk to Mom. She wore slacks, with an ironed crease down the center of each leg. She dyed her hair, and carried a pack of cigarettes. She would give each of us a double pop-sicle, and tell us to take it outside to eat it. Then they could talk. We could still stop in to visit at her house, and were welcomed most of the time.

We could play in her yard outside. We could go to see the rabbits, in cages that were stacked up the side of the garage. We could see the brand new hairless pink baby bunnies, and pick our favorites of the big ones, based on color, length and softness or fur, and friendliness. We could pet her Beagle. My grandmother had named him “Sputnik.” When I asked what that meant, she laughed. “It’s Russian;” she said, “it means ‘out of this world!'” She got another new dog, a chihuahua. His name was Pancho Villa.

Before I turned ten years old, my grandmother had also died. That changed our world completely.

To our household, we brought in my grandmother’s everyday dishes and her special occasion dishes, her full set of matching silverware, frosted iced tea glasses picked up as souvenirs from vacation spots all over Michigan, a tiny, engraved, silver cup and spoon that had been hers when she was a baby, a roll-top desk that had belonged to my grandfather, many suitcases and purses, books and bookcases, and a car. We had a telephone installed for the first time, since Grandma would no longer be there to take telephone calls and messages, or run next door to tell us.

As young children, it was like a roller coaster ride: one minute we were thrilled at our new car, the telephone, the dishes…the next minute remembering the reasons for the windfall, and that our grandmother was no longer with us. As for my mother, at not quite thirty years old, she had lost both her parents. She had no brothers or sisters. She had a husband that worked long hours, and seven small children at home.

My parents rented the house next door. I can’t recall all the tenants. I think I remember one woman renter, followed by a couple men. One was a man who drove a beer truck. He had a skin disease, and was told by his doctor to sunbathe in the nude. My Dad built a partition of cedar poles and woven metal flashing to give him privacy, and we were told to stay out of that yard.

Later, my Aunt Margaret moved in, with her eight children. The upstairs became a loft bedroom for her four boys: Barry, Kim, Bobby and Greg. Three of the girls, Shirley, Gail and Mary Jean, shared one small bedroom; the baby, Joannie, shared the other bedroom with her Mom.

Dad built an addition off the back of that house, then, for a laundry room and a little extra space. He’d been regularly adding on to our home, as well. Our family was expanding; Dad added gardens and livestock as well as rooms. That will have to wait for another day!