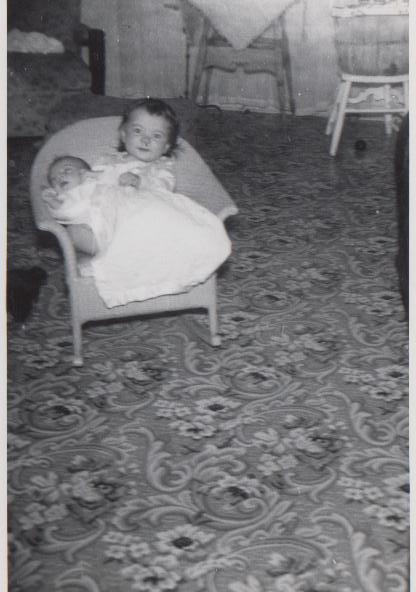 Though the property was a wedding gift to my parents from my mother’s parents, and my father started work on it right away, the house was not ready a year later, when Brenda was born. She lived, for a while, with my parents in an apartment not far away. By the time I was born a year after Brenda, the family was in their home. My father built it, and continued building it for all of his life.

First, it was square, with a pitch to the roof so steep “it could split a raindrop,” according to my Aunt Katie. From the driveway to the front door, the sidewalk ran parallel to the house, then made a right turn and went straight to the large pink block of cement that was our front step. The blade of a hoe was embedded in that step, beside the door, to use as a boot scraper. I don’t remember a single injury involving that boot scraper, though we were accident prone children and managed to hurt ourselves on things that appeared much less dangerous!

In the bit of lawn that the sidewalk enclosed between driveway and house, there was a welded metal planter. It was a simple rectangular box, with corners of L-shaped steel that extended down to form legs. The box was white with red trim, and bold red numbers were painted on the front, with our address: 3678. I don’t know who made it, or where it came from, or even who first painted it. In later years, when Patsy “Doney” came to stay with us for weeks every year, to give our rooms a fresh coat of paint, he’d carefully repaint the planter and renew the numbers in bright red. It has been planted with petunias, marigolds, vines and tomatoes over the years. It has sometimes grown up in weeds. Colors changed from red and white to black and white, but it has endured. I think it is still sitting in the front of that house, all these years later.

The original house, as I said, was a square. The front door was in the center, with windows evenly spaced on either side. The living room spanned the entire front of the house.

On the back wall, a doorway on the right led to a little hall with doors leading to a bathroom and bedroom. A linen closet fit in the space under the stairs. A trap door in the floor of the hallway led to the crawlspace underneath the house. It was dark and damp and scary; we didn’t want to go down there, ever, not even during a tornado. Dad would occasionally have to go down there, to check on something drainage or plumbing related, but I don’t think we children ever ventured down that hole. None of the girls, anyway!

A doorway on the left side of the back wall of the living room led to the kitchen, which also housed a large fuel oil furnace. A door led out to the back yard. There was a stairway in that space, too, but it was closed off, not yet in use.

I don’t remember that kitchen, though I have seen photos taken in it. Before long, Dad had a new kitchen underway…but that will have to wait for tomorrow!