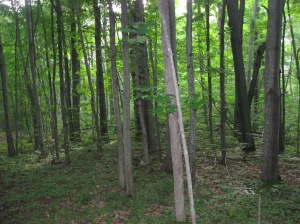 When my friend arrived on Beaver Island recently, someone yelled out to her, “Hey, Terry, are you still digging in the dirt?”

Her answer was “Yes!”

I was fortunate, this year, to be able to work with her on an archaeological dig.

This wasn’t my first.

Twenty years ago I went to Grand Turk Island in the British West Indies as part of a team working with an archaeologist from the University of Florida. I made the arrangements through an organization called Earth Watch. I was taking a vacation alone and knew that – without an agenda – I would spend far too much time and money in shops and restaurants and bars pretending to have a good time. So, I paid for a vacation where I was expected to work forty hours a week.

Our expedition was titled “Before Columbus.” We were studying the Taino people, a division of the Arawak, who – by some estimates – were three million strong at the time of Columbus’s first landfall. Within twenty years they were nearly wiped out.

Our crew consisted of Bill Keegan, the professor who had been studying the history of the Taino on the Turks and Caicos Islands for twenty years, two graduate assistants, and ten folks like me, who had paid for the chance to work and learn.

We were a diverse group. There was a young woman just out of the army, a lawyer from San Francisco, a nurse from Boston, and a couple who were both involved in the burgeoning computer industry in the Silicon Valley. There were two retired professors, one from South Carolina, the other from Minnesota. My roommate was a dear woman (eighty-four years old) who retired from CitiBank in New York City. The youngest member of our team was a seventeen year old young man from upstate New York, whose grandmother bought him the trip as a high school graduation present. And me, a forty-year-old waitress from Beaver Island, Michigan.

We worked together, ate together and played together. We shared lodging and household chores. We rotated cooking and clean-up duties, with a chart just as if we were a family. After work, there was time for showers or swimming, reading or writing. We often played Trivial Pursuit after dinner. We never missed running down to the beach at sunset, to try to spot the “green flash” as the sun sank into the horizon.

I loved the work! From history to basic surveying skills, the learning curve was tremendous. I liked the precision of the gridded site, the mapping and record-keeping. I loved the child-like feeling that comes with being on hands and knees, digging in the sand. Always present was the possibility of discovery.

At the time, I thought that was the kind of trip I’d take regularly. As it turns out, it was a once-in-a-lifetime experience.

I’ve never forgotten it, though, and watched with interest as individuals or teams came to study the history buried here. I’ve told myself “next year I’ll find the time” so often, I almost quit believing it.

Terry is a wonderful teacher and a great story-teller. She is intent on finding, recording and preserving history, but never to the point of disrespecting the people who walked the earth before us.

She walks the woods as if she has a built-in compass. That comes, I suspect, from hundreds of hours spent familiarizing herself with the area. Terry has a good memory and an eye for detail.

We met on the road each morning, and carried our supplies in to the site. We altered our route every time, so that we wouldn’t leave a trail.

We were a crew of five. We took turns at jobs, so that each of us would experience digging, sifting and record-keeping.

We laid out an area four feet square, and divided it into a grid of sixteen sections. We went down six inches at a time, one section at a time. The first layer is mainly roots and leaf litter, but it has to be screened anyway, just to be sure. The second layer is more gravelly, and by the third, we were sifting through sand.

Our discoveries were small, but significant: isolated bits of charcoal, tiny pottery fragments, flint rock and chert. It didn’t matter, we cheered at every one, congratulated each other for recognizing something worthwhile in the dirt as we sifted through it, and sat in awe that we were touching the past.

It was an exhausting, exhilarating week.

I’ll jump at the opportunity to do go digging in the dirt again!