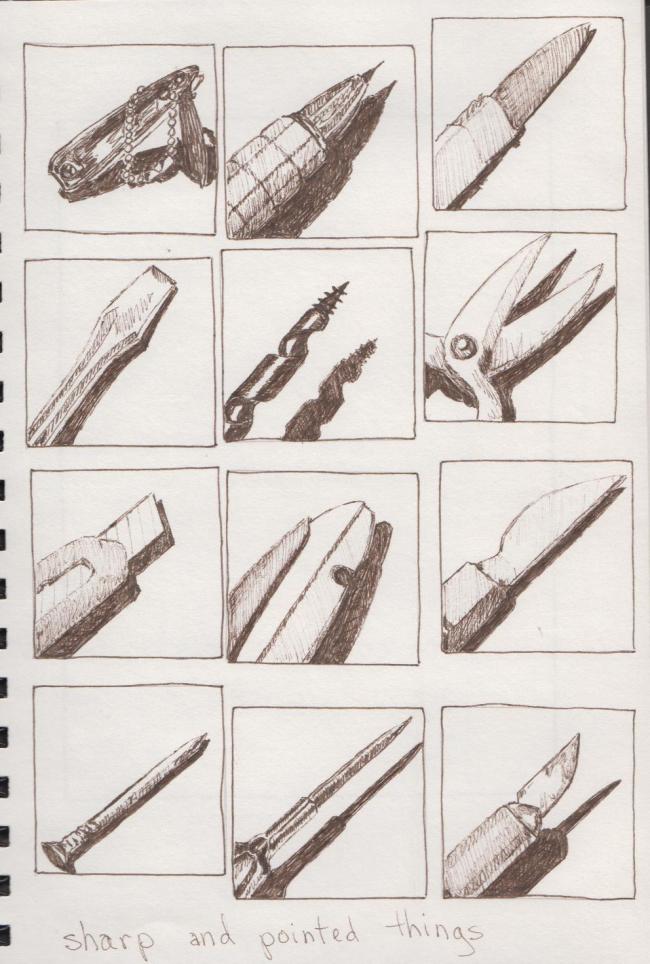 My little thumbnail sketches keep getting smaller and smaller!

This week, with a rare three days – sort of – away from my main jobs and in anticipation of two sisters coming to visit next week, I decided to do some cleaning and rearranging.

I emptied and moved two large (32″ wide x 62″ high x 12″ deep) bookcases that had stood on either side of the window on the west wall in the living room. I replaced them with deeper shelves on the north wall, that hold the small TV and the stereo as well as books.

The stereo – along with the record albums, cassette tapes, compact discs and speakers – had been housed in my bedroom, which is much too small for all of that excess.  I may read a bit before going to sleep, but that’s about it. I don’t spend enough awake time in the bedroom to listen to music, so the equipment was never used there.

Moving the stereo allowed me to move the two deep bookcases out of my bedroom and into the studio. One bookcase under each window there, with art books categorized and alphabetized on the shelves.

Having a new home for the art books allowed me to dismantle the shelf unit that took up the entire stairway wall in the studio…and freed up the shelf standards that I needed to support the new living room shelves. They needed to be spruced up first with a fresh coat of paint, of course.

As for the bookcases I took out of the living room: one went to the landing at the top of the stairs, the other to the kitchen, to replace a ratty looking set of shelves that had been holding my cookbooks and gardening books.

The kitchen shelves got stored in the shed; the standards got painted for use in the living room with the others.

To free the landing for the bookcase, I had to move a cabinet that held bed linens. That is right now taking up space in my bedroom, but I think it will fit in the closet space under the eaves.

When I finish, everything will be much more organized and more suited to my lifestyle.

In the meantime, I’ve created a big mess.

In three days, I have moved four bookcases and two dozen shelves, a linen cabinet, stereo system and about four hundred books. I painted and hung five shelf standards – twice – and patched twenty four holes (from my misguided first attempt at finding the studs without a stud-finder). I also taught my after school art class, made up the guest rooms at Aunt Katie’s house and drew the sketches you see here.

The living room is looking cute and cozy as can be…but I still need to find a place for the rocking chair, the trunk, and the low table.

My bedroom will be much more open and inviting, with the dresser, hope chest, nightstand and bed as the only furniture. I’m banking on being able to fit that linen cabinet (as well as the trunk, the second dresser and possibly the rocking chair) into the closet.

The studio is not quite there yet. I lost a great deal of storage when I took down that wall of shelves. All of the excess is temporarily piled on my drafting table.

Granted, it would have been better to plan a major overhaul for a better time…maybe for a time when company isn’t coming in just a few days.  I may be frustrated and angry with myself by the weekend, but I’m not there yet.

I’m pretty proud of all that I’ve accomplished. In fact, I’d have been blasting Helen Reddy’s “I am woman, hear me roar”…if I hadn’t accidentally snapped the speaker wire while moving the stereo.